Multitude of Organizations Urge Congress to Save Soon-to-Expire NMTC 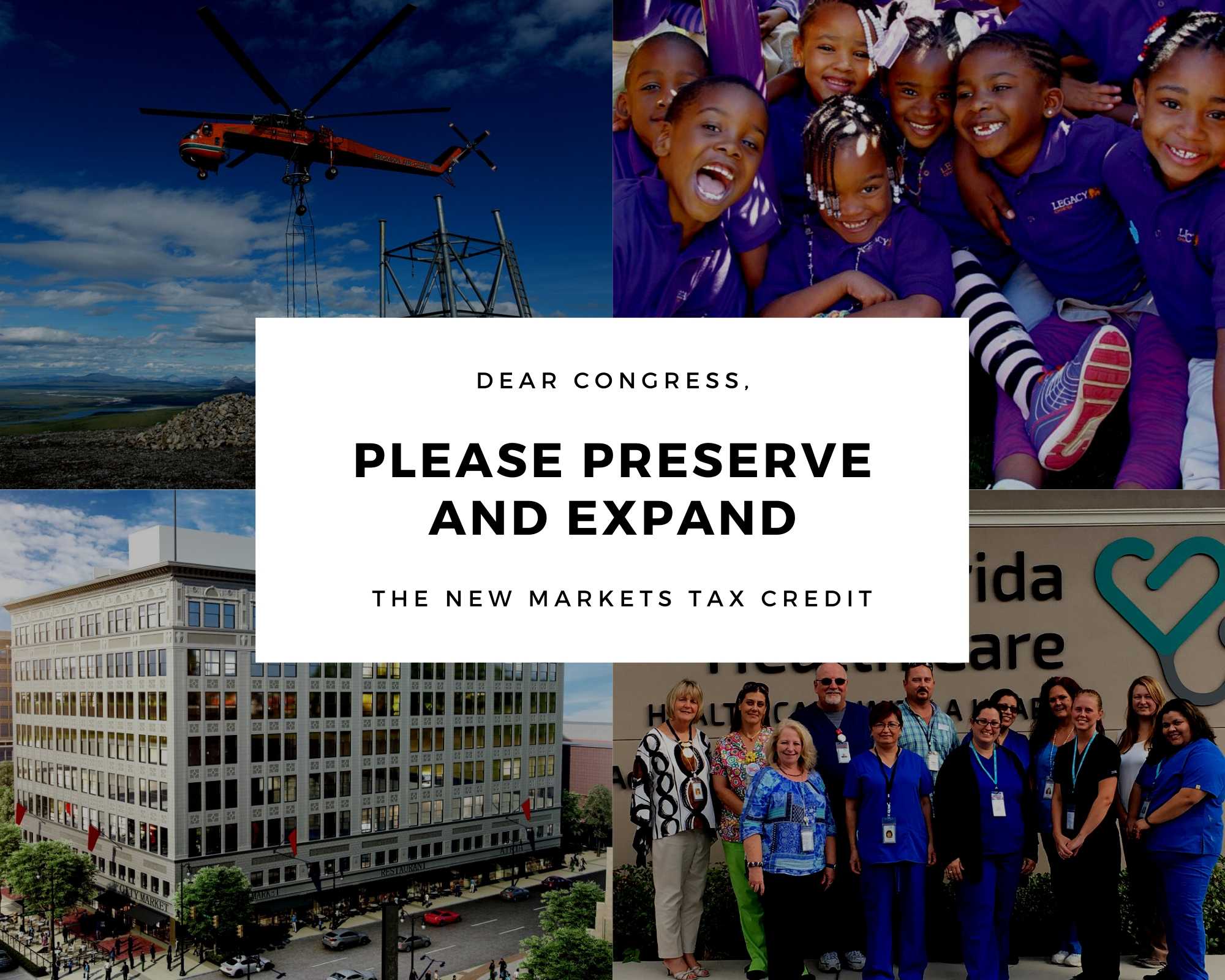 Nearly 1,000 businesses, investors and organizations call on Congress to expand and make the community and economic development tax credit permanent

“As the New Markets Tax Credit nears its expiration at the end of 2019, we hope Members will take note of its broad support,” said Kermit Billups, President of the NMTC Coalition and EVP, Co-Founder at Greenline Ventures. “The letter was signed by nearly a thousand organizations, representing all 50 states, Washington, D.C. and Puerto Rico, and located in every type of community, from rural areas to urban neighborhoods, and everywhere in between. Why? Because they have seen firsthand the success of NMTC in revitalizing communities, creating jobs, increasing economic opportunity and improving lives.”

Established in 2000 in the Community Renewal Tax Relief Act (P.L.106-554), the New Markets Tax Credit is a bipartisan effort to stimulate investment and economic growth in low-income urban neighborhoods and rural communities. The NMTC was most recently provided a five-year authorization in The PATH Act. (P.L. 114-113) in December 2015. There is great bipartisan support for NMTC in Congress:  32 Senators signed on in support of S. 750, which was introduced by Senators Roy Blunt (R-MO) and Ben Cardin (D-MD); in the House, H.R. 1680 has 109 cosponsors, led by Reps. Terri Sewell (D-AL), Tom Reed (R-NY), and 24 members on the Ways and Means Committee.

The NMTC works by providing a shallow federal tax credit of 39 percent, taken over seven years, for investments made in census tracts where the individual poverty rate is at least 20 percent or where median family income does not exceed 80 percent of the area median. Last year, more than 80 percent of all NMTC investments were in communities exhibiting severe economic distress with extremely low-incomes, high unemployment, or high poverty. Over the past 15 years, communities have come to count on the NMTC as a source of low-cost capital for challenging projects that would not have been possible but-for the NMTC. Since 2003, the Credit has delivered well over $100 billion in flexible capital to farming towns and urban neighborhoods left outside the economic mainstream.

“Despite an exemplary track record in revitalizing some of the poorest communities in our country, financing over 6,000 businesses, hospitals, daycare facilities, and manufacturing expansions and creating some one million plus jobs, the future of the NMTC is in jeopardy ,”  said Bob Rapoza, spokesperson for the NMTC Coalition.  “Without an NMTC extension, many of America’s urban neighborhoods and rural communities, struggling with high rates of poverty and unemployment, will lose access to billions of dollars for high-impact, community revitalization projects. No other the federal tax incentive is generally available to economically distressed rural and urban communities to promote economic revitalization making a permanent extension and expansion of the New Markets Tax Credit vital.”

For examples of how the NMTC is making an impact in each state, see the NMTC Coalition’s 2019 NMTC Progress Report, State Impact Map or check out its Project Database.

The NMTC is an important source of financing for businesses and community facilities in America’s most economically distressed rural and urban communities. Over the past 15 years, communities have come to count on the NMTC as a source of low-cost capital for challenging projects that would not have been possible but-for the NMTC. Since 2003, the Credit has delivered well over $100 billion in flexible capital to farming towns and urban neighborhoods left outside the economic mainstream. Those investments have generated over one million jobs at a cost to the federal government of less than $20,000 per job.

Without an NMTC extension, many of America’s urban neighborhoods and rural communities, struggling with high rates of poverty and unemployment, will lose access to billions of dollars for high-impact, community revitalization projects. For these reasons, we urge Congress to provide a permanent extension and expansion of the New Markets Tax Credit.

Testimonials about the NMTC from signatories

Our Chicago Land-marked building provides affordable space to 20+ non-profit tenants who serve over 1,000 low-income individuals weekly. NMTC will enable us to restore our vintage building and increase its energy efficiency for years to come in assuring our community’s diversity.

New Market Tax Credits have allowed our agricultural cooperative to develop businesses that grow rapidly and add many jobs to the economy, providing a big return on investment to the nation.

New Markets Tax Credits (NMTC) enabled Sherwood Forest, a youth development organization serving young people from economically distressed families and communities in the St. Louis metropolitan region, to expand our resident camp facilities located in Reynolds County, Missouri. This facility expansion allows Sherwood Forest to serve more children during the summer and in the school year. Construction took place in an economically distressed rural area of the State of Missouri. Without NMTC, the scope of this project would have been greatly reduced. The positive impact to those we serve from St. Louis and to our community in rural Missouri will be felt for a long time to come. I strongly encourage the bi-partisan support for the renewal of the New Markets Tax Credit Extension Act (H.R. 1680 and S. 750) so that other communities will benefit in years to come.

We want to request this funds to help our those who needed more, elderly community and recover the available housing in PR. We, PR needs this NMTC to develop our projects. Thanks.

We’ve been the beneficiaries of one development project that used NMTCs to assist us in funding our project. We would have had to scale back our project had we not had the NMTCs, which would have meant serving thousands fewer patients over the nearly 10 years our health clinic has been in service. Simply put, this program has relieved more misery and lengthened and saved lives.

The revitalization, beautification and utilization of areas previously un/underutilized to one that produces employment, enhanced outlooks and hope.

NMTC’s provide capital to assist in funding the development and expansion of businesses that then expand employment and the financial well being of communities.

The NMTC means financing to support job creators and service providers in our toughest neighborhoods. It’s a chance for the private sector to invest in communities through a proven structure to get impressive results.

We’re super excited about the future, and this expansion is giving us the capacity to continue growing. The new facility will be terrific for our employees, being fully air conditioned—which is rare for a facility like this in Denver. The biomass boiler enables that, which burns sawmill byproduct and generates heating and cooling for the entire building. Without the financing from CHFA, it would’ve been far more difficult to add these environmental attributes.

Investments made in our lowest income communities’ assists in economic development and has been extremely helpful.

Use of the NMTC enabled the final capital structure for Mississippi Silicon. At $200 million, Mississippi Silicon is the largest private investment ever made in Tishomingo County, Mississippi. We were the “anchor tenant” in an industrial park in Burnsville MS. The industrial park was virtually empty when we invested here. Now it includes four different companies and as many as 500 well-paying jobs. This makes quite a difference in a rural county with total populations approximating 20,000.

We are a CDE for NMTC purposes, though have not yet received an allocation. But, we are located in south Georgia in the center of several counties that are defined as “severe distressed/non-metropolitan”. We feel that we are in a unique environment to attract job creating industries to LICs with the help of NMTCs. The CDFIFund.gov should have the NMTC program extended, and the allocation amount increased (as it is typically oversubscribed in excess of 3:1).

It allowed us to build a rural health care center in an area needed. We will improve the quality and life of patients in Coos County. If the funding would not have been available, the project would not have happened.

The NMTC program has allowed our company to create and preserve jobs in rural areas that would have had high unemployment without our investments there.

It was the difference between making the redevelopment of a blighted neighborhood being reborn and letting it continue to deteriorate. The jobs aspect of the program is a key driver of the success and gaining local support.

As a Community Development professional with over 20 years as a Bank CRA Officer, I’ve witnessed the positive impact that the NMTC program has had since its inception, revitalizing the low-income communities which I serve, by permitting individual and corporate investors to receive a tax credit’s against their federal income tax in exchange for making equity investments in Community Development Entities. Please continue to fund this vital program so that low-income communities may continue to achieve sustainable growth!! Thank you! Patricia A. Rock

New Markets Tax Credits play a vital role in attracting investments to low-income communities in Arkansas and would not receive investments without them.

[The NMTC] enabled us to support the construction of an office facility where available office space to support our growth in employment under one roof for our affiliate EMSI, the third-largest employer based in Moscow, Idaho. Without the benefit of the NMTC, our board would likely not have supported the out of pocket investment to justify the construction and ultimate location of employees in the city of Moscow, Idaho.

We just used a $12 million NMTC allocation to finance the building of a Domestic and Sexual Violence Shelter and homeless shelter for families. This would not have happened – at least at the capacity that it did – without NMTCs. Numerous women, men, and children will be safe and off the streets in Missoula because of this project.
Share on facebook
Share on twitter
Share on linkedin
Share on pinterest