City of Asylum Pittsburgh is a Pittsburgh nonprofit organization that was co-founded by Henry Reese and his wife Diane Samuels in 2004 with the goal of creating a thriving community for writers, readers, and neighbors. 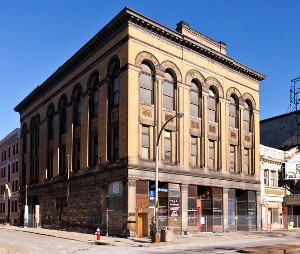 City of Asylum Pittsburgh (‘COA’) is a Pittsburgh nonprofit organization that was co-founded by Henry Reese and his wife Diane Samuels in 2004 with the goal of creating a thriving community for writers, readers, and neighbors. COAP opened its doors in Pittsburgh’s Central Northside neighborhood to provide sanctuary to literary writers who were exiled and under threat of persecution from their home countries. It also offers a broad range of literary programs to the community, encouraging cross-cultural exchange. All of COAP’s programming is free to the public, including books, classes, and performances. When COAP wanted to expand its services, PNC, Pittsburgh Urban Initiatives, and a variety of philanthropic partners helped finance the adaptive re-use and historic renovation of the four-story former Masonic Temple into Alphabet City, a mixed-use property which now serves as COAP’sheadquarters. Alphabet City also include flexible performance space, offices, a book store, a restaurant, and eight residential units, six of which is now available to the public for rent and two of which was used by COAP for its programming. Located in the Garden Theater Block in Pittsburgh’s North Side, the building has been vacant since the mid-1990’s, and the project is a key part of a City -led neighborhood revitalization plan.’City of Asylum is already a wonderful North Side institution and I am thrilled at this next step in their evolution. This project is now key to the continued rebirth of the Federal North corridor, which is one of the key entryways not only to the North Side but the city as a whole,’ said Mayor William Peduto. Local foundations have made $3.7 million in grants to the project; Pittsburgh Urban Initiatives, together with PNC, contributed New Markets Tax Credit allocations of $8 million; and the balance is a blend of federal and state historic tax credits, state grants, Community Infrastructure and Tourism Fund, a facÌ§ade grant, a grant from the Allegheny Regional Asset District, and a loan from The Reinvestment Fund. PNC was also the investor of the New Markets and historic tax credits. The $10 million project created 12 construction jobs and 20 permanent jobs, 13 of which are expected to be accessible to low-income persons.’City of Asylum has enriched Pittsburgh’s cultural life’ said Amy Merritt, PNC’s NMTC relationship manager. ‘Their renovation of this iconic building allows them to expand their work in support of our cultural community while advancing the development momentum that is occurring in the FederalNorth corridor.’