The revitalization of Akronʻs downtown corridor created a vibrant mix of urban living, healthy foods, new commercial opportunities, and the expansion of the Akron Civic Theater. 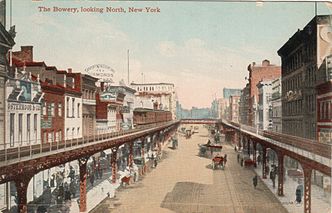 The Bowery project consists of six previously city-owned buildings along Akron’s downtown corridor. Among them stands the 158-foot-tall Landmark Building at the corner of Main and Bowery, which opened in 1923 as the Akron Savings and Loan Company. One of the more prominent buildings in the district, it was designed by New York architect Alfred Hopkins, who at the time was primarily known for his economical, yet complex approach to architecture, as well as his specialization in farming complexes. The buildings are located at the center of Akron’s South Main Street Historic District and played a major role in establishing the area as Akron’s primary commercial district – particularly in the rubber industry. The city of Akron was the birthplace of Goodrich, Firestone, and General Tire.

The other buildings included in the revitalization project consist of various historic shops and office buildings that once housed furniture showrooms, doctors, and jewelers, but have since sat vacant for over two decades. The Akron Civic Theater, located a few doors down from the Landmark Building, was the blocks only heartbeat for nearly twenty years.

When complete in 2020, the catalytic, mixed-use project features 92 mixed-income apartments, office space for local businesses, and over 39,000 SF of storefront and commercial space, much of which was pre-leased prior to closing. The buildings also be connected and have access to an adjacent parking structure owned by the city. Among the new tenants of the Bowery project was a local fresh food grocer and café that will occupy 8,400 SF of space.

The Akron Civic Theater, known as the “Jewel on Main Street” also be playing a significant role in the redevelopment. They will lease 7,127 SF of space for a new box office, offices, as well as new space for small community events, and additional theatre space for small-scale performances.

Finally, in an effort to continue the activation of Akron’s Main Street, the City of Akron uses a portion of the development to create an indoor promenade to connect Main Street to the Lock 4 Park on the canal level behind the Bowery. The promenade features pop-up retail spaces and community events and will encourage pedestrians to take advantage of the scenic canal, which has also seen recent revitalization. Future tenants of the Bowery project that are being considered include a coffee shop, a restaurant, and other uses which provides necessary amenities to create a 24-hour life cycle for downtown living.

The downtown corridor of Akron has suffered considerable disinvestment for decades and is one of the most important components to the recently released Downtown Akron Vision and Redevelopment 10-year action plan, which was created in collaboration with the City and community residents. Residents and officials have long identified the need for jobs, access to healthy food, and affordable housing as a top priority. The Bowery project addresses all these issues while eliminating blight and spurring additional revitalization for the historic Main Street of Akron.

The project is located in a severely distressed low-income area suffering from high unemployment and poverty rates. To support the availability of affordable housing in the area, the Bowery project will dedicate 23 of the available rental units to low-income individuals and families (80% AMI). To ensure the inclusion of healthy food, the development team has pre-leased a significant portion of the commercial space to a local fresh food grocer. When the project was financed, downtown Akron had no substantial grocer to support local residents and is considered a food desert. The Bowery adds a full-service fresh food grocery as the anchor retail tenant.